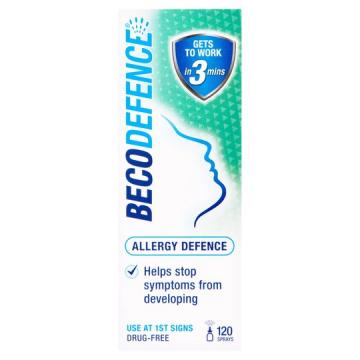 Becodefence Adult Nasal Spray is clinically proven to reduce allergic rhinitis symptoms, as it blocks allergens that cause the allergic reaction. Becodefence nasal spray works directly where the allergic reaction starts, on the respiratory mucosa of the nose. Becodefence’s patented Nasya technology uses a combination of oils and emulsifiers, which give unique transformation properties from gel to liquid for easy dispersion. Upon settling on the nasal mucosa, Becodefence reverts to its original gel-like consistency to form an allergen-impermeable micro-gel barrier. As most airborne allergens come in through the nose, Becodefence is an ideal solution for hay fever and allergic rhinitis.

Becodefence forms a lining on the inside of the nose, this protective barrier helps to deactivate pollen and gets to the root of the problem – it can also address all major hay fever symptoms, without the side-effects.  This means it can be used to help prevent the onset of symptoms as well as treating them.

Use Becodefence to treat a range of conditions including:

Allergic rhinitis is caused by the immune system reacting to an allergen as if it were harmful. This results in cells releasing a number of chemicals that cause the inside layer of your nose (the mucous membrane) to become swollen and too much mucus to be produced. Common allergens that cause allergic rhinitis include pollen (this type of allergic rhinitis is known as hay fever), as well as mould spores, house dust mites, and flakes of skin or droplets of urine or saliva from certain animals.

Hay fever, also called allergic rhinitis, causes cold-like signs and symptoms, such as a runny nose, itchy eyes, congestion, sneezing and sinus pressure. But unlike a cold, hay fever isn't caused by a virus. Hay fever is caused by an allergic response to outdoor or indoor allergens, such as pollen, dust mites, or tiny flecks of skin and saliva shed by cats, dogs, and other animals with fur or feathers (pet dander).

Hay fever signs and symptoms can include:

Read package insert. Does not cause drowsiness. Use only as directed. Keep out of the sight and reach of children.