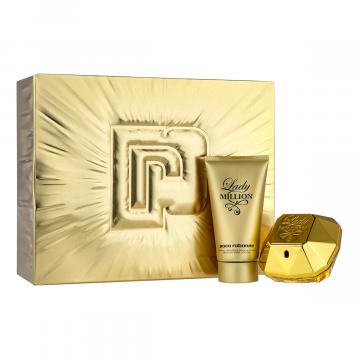 Paco Rabanne Lady Million is a carnal white floral fragrance that borders on addiction. Disarming. Play with fire and obey no one. Except for his fantasies. An opulent, white floral feminine fragrance that borders on addiction. A flamboyant and fresh offer. Neroli, raspberry, bitter orange. White-nectar: absolute jasmine sambac and orange blossom. Carnal, brilliant. The signature honey-patchouli scent to trace the trail. A woody fragrance with vibrant notes, powerful scents. A touch of taste. A haunting finale for a sensual and daring fragrance.

Dazzle, like nothing else. Play with fire and obey no-one. Except for his fantasies. Cheeky beauty.

Established in 1966, Parisian fashion house Paco Rabanne has asserted a distinctive identity resulting from the synthesis of cutting-edge contemporary design and radical craft. Mr Paco Rabanne was born Francisco Rabaneda y Cuervo in 1934 in Spanish Basque Country. At the age of five, he and his mother, a head seamstress at Balenciaga, escaped the Spanish Civil War by fleeing to France, where he assumed the name Paco Rabanne. By the early 1960s, after training as an architect, he applied his skills towards avant-garde accessory design, proposing unique creations for several haute couture houses.

For the debut of his namesake brand in 1966, he presented “Manifesto: 12 unwearable dresses in contemporary materials.” Over the next few years, he would experiment with looks made from moulded plastics, hammered metal, aluminum jersey and knitted fur that were at once sculptural and seductive. His iconic chainmail dresses helped define an era of shape-shifting fashion and remain emblematic of the house still today. In 1967, when Françoise Hardy appeared in a mini-dress assembled from gold plates inlaid with diamonds, she radiated an image of Paco Rabanne that would shine for years to come as she continued to wear his designs. Among Mr. Rabanne’s other muses were Brigitte Bardot, Jane Birkin, Jeanne Moreau, and Audrey Hepburn, who wore a metallic paillette dress in Stanley Donen’s hit film, Two for the Road.

Born in Brittany in 1982, Julien Dossena studied at the École d’Arts Appliqués Duperré in Paris and attained his diploma in fashion design from the prestigious La Cambre fashion department in Brussels in 2007. The following year, Dossena was named Senior Designer at Balenciaga under Nicolas Ghesquière, where he worked until Ghesquière’s departure in 2012. Dossena established the ready-to-wear label Atto that same year, designing two seasons before his appointment as Artistic Director of Paco Rabanne in July 2013.

Shortly after Paco Rabanne established his fashion brand, Spanish group Puig acquired the license for Paco Rabanne perfumes in 1968, thus setting in motion decades of memorable fragrances bearing the Paco Rabanne name. From Calandre (1969), a bold floral that defied traditional perfumery, debuted in 1969. Its name took cute from the chrome-plated front grille of a Rolls Royce; its bottle, modern and monolithic in glass and metal, was inspired by the United Nations Headquarters in New York.