15% off all Nicotine Replacement Products. 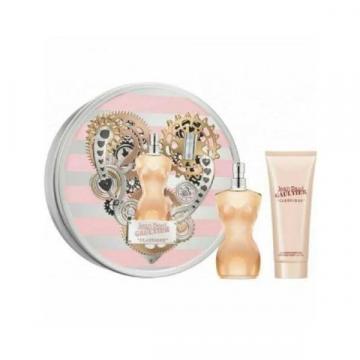 Jean Paul Gaultier Classique EDT is a symbol of seduction and extreme sensuality. The iconic bust bottle with its corset, the most quintessential piece from the  Jean Paul Gaultier wardrobe. A multi-facetted woman's fragrance for ladies of character. A childhood memory which became a femme fatale. The Eau de Toilette delivers the irresistible softness of orange blossom blended with the powerful aphrodisiac that is ginger. The odour of rice powder, a reminder of childhood, is twisted with a powerful caress of vanilla.

A bust-bottle that is as unexpected as its curves are generous. An ode to the beauty of woman. Etched on the transparent glass is the quintessential item in Jean Paul Gaultier's female wardrobe: the corset, a symbol of seduction and extreme sensuality.

The irresistible sweetness of orange blossom is combined with the powerful aphrodisiac notes of ginger. The scent of rice powder, a reminder of his childhood, is given a new twist with the caressing strength of vanilla.

The irrepressible Jean Paul Gaultier has been creating inclusive fashion since 1976. From growing up in the suburbs, his extraordinary destiny has seen him become one of the greatest couturiers in the world, without attending fashion school. Thanks to his audacity, talent, irreverence and humour, of course!

“I love to blend clothes, people, social classes, genres... and have fun with it“. Well before he said that, Jean Paul Gaultier made inclusivity, diversity and the mixing of genres the uplifting pillars of his world. A world in which people of every colour, shape and identity are celebrated! For Jean Paul, this vision of the world is more than political, it’s natural, celebratory. Some may call it provocative, but he simply wants to show the world in all its diversity.

In 1993, Jean Paul Gaultier set himself a new challenge and created his first fragrance, Classique. Its success was instant, this wonderful object of desire winning fans all over. Primarily for its contents – an all-consuming combination of vanilla, orange blossom and ginger – and the iconic bottle with its sensual curves, of course. Its masculine alter ego, Le Male, went the same way, becoming another of the best-selling fragrances in the world. With its fresh notes of lavender and mint, Le Male is seriously sexy, ready to seduce anything in its wake! This obsession with sensual accords has become synonymous with the House of Gaultier, which continues to create fragrances with instant appeal. From the aptly named Scandal with its captivating honey notes, to the intoxicating new duo La Belle and Le Beau that stretch out the summer with notes of pear (for her) and coconut (for him), there are various deliciously addictive creations to choose from.