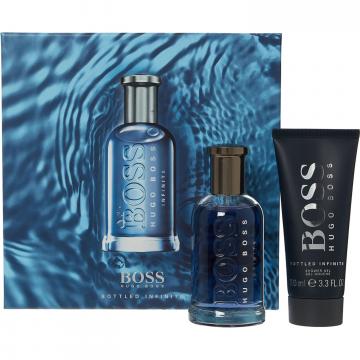 Hugo Boss Bottled Infinite 100ml EDP is an energising and sensual fragrance that combines the freshness of citrus with the intensity of aromatic and woody notes. This new interpretation of the Boss Bottled collection makes an ideal gift for the modern man. This fragrance of contrasting forces combines the freshness of apple and bergamot notes with intensely addictive cardamom, and the dark elegance of vetiver.  The Man of Today navigates various roles in his life, whether pursuing success or seeking balance and authenticity. Boss Bottled Infinite represents the Man of Today's aspiration to reconnect with his inner-self. An energizing and sensual aftershave for men, that combines the freshness of citrus notes and the intensity of aromatic, woody notes.

The fragrance opens on a refreshing, sparkling top note of mandarin and apple, spiced up by a hint of cinnamon and sage. Warm, aromatic notes of patchouli, rosemary and lavender come together at the masculine heart. The rich olivewood combined with sandalwood creates a smooth yet deep base note, unfolding harmoniously on skin.

Every fragrance has concentrated oils in the formula. It is the level or quantity of this which determines which category the fragrance sits in.  The higher the concentration, the more perfume oil and less alcohol it will contain. Fragrance categories are broken down into parfum, eau de parfum, eau de toilette, eau de cologne and eau fraiche. Eau de parfum have the highest level of essential oils in them. This is what most people consider as the ‘go-to’ dilution for women’s perfumes and you will be treated to roughly 12%-18% percent of oil.  On average, an eau de parfum should last around 4-5 hours and we particularly recommend them for dates or girls’ nights out, but don’t be put off choosing one for every day wear too!

Hugo Boss, also known as just Boss, is a German fashion brand founded in 1924 in Metzingen, Germany. It is named after its creator – Hugo Boss. He was born and died in Metzingen and the headquarters of the fashion house is still based there. Initially, Hugo Boss produced general-purpose clothing. The founder was loyal to the Nazi German ideology and in 1930, with the rise of the Nazi Party, the brand started making Nazi uniforms. Later on, they began supplying other organizations with uniforms too such as the National Socialism Party. After World War II, Hugo Boss started making men’s suits. Since then, the company has evolved into a major world-known fashion brand with its own women’s and children’s clothing collections. They have been also making perfumes since 1985.

Hugo Boss granted its first fragrance license and launched their first perfume in 1985 – the men’s cologne Boss Number One. They kept creating men’s colognes in the following years too. Some of them are Boss Elements and Hugo for Men. In 1997 they already had a fragrance for the ladies too – Hugo for Women. Nowadays, there are about a hundred different Hugo Boss fragrances. They have a huge variety of styles for every occasion and every taste.