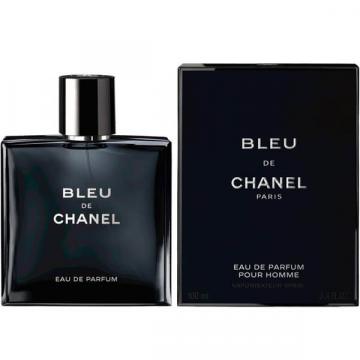 Chanel Bleu De Chanel Eau De Parfum 100ml is an ode to masculine freedom expressed in an aromatic-woody fragrance with a captivating trail. A timeless scent housed in a bottle of deep and mysterious blue. Bleu de chanel is presented here in an eau de parfum with an exquisitely pronounced scent that reveals a determined spirit. The Eau de Parfum is an aromatic-woody fragrance that teams New Caledonian sandalwood with notes of ambery cedar and tonka bean. Its trail is warm and sensual. It is the fragrance of a man who refuses to be bound by rules. It reveals a character that asserts itself with independence and determination. The spirit of a man who chooses his destiny.

Act 1 - Freshness: A spirited burst of freshness ripples across the skin. A sense of liberating well-being is released. Citrus accord, Vetiver, Pink pepper.

Act 2 - Energy: A rush of explosive energy galvanises the senses. The taste for action is electrifying. A positive current of vitality takes over. Grapefruit, Dry Cedar notes, Labdanum.

Act 3 - The senses: The body gains an untouchable confidence, embracing a masculinity that is enigmatic, irresistible, impenetrable. Frankincense, Ginger, Sandalwood.

When couturier Gabrielle ‘Coco’ Chanel launched her debut perfume No5, in 1921, it changed the whole world of fragrance. Perfumer Ernest Beaux produced a portfolio of samples for Mademoiselle to try – and she chose the fifth proposal. So No5 was born – and has since gone on to become the most recognised name in perfumery, worldwide.

The story of Chanel herself has become legend. After growing up in an orphanage, Gabrielle Chanel – born 19th August 1883, in Saumur – went on to open her first Paris boutique, selling hats, at 21 Rue Cambon in 1910. She made her name selling clothes that were not just beautiful and stylish, but comfortable, freeing women from tight corsetry through her innovative use of tweed and jersey, tailored with a nod to men’s clothing – including trousers. She’s also widely credited as first to introduce that essential in a woman’s wardrobe: ‘The Little Black Dress’.

Chanel‘s first men’s fragrance – Chanel Pour Monsieur – was introduced in 1995, created by Henri Robert, who took over from Ernest Beaux as in-house perfumer. (Since then, an entire men’s fragrance wardrobe has been introduced, spanning leathery, virile Antaeus through to the aromatic-woody blockbuster Blue De Chanel.

Henri Robert also created No. 19 – named for Chanel’s birthday – which was initially reserved for special friends and clients. Coco Chanel died on 10th January 1971 in Paris, on the eve of presenting her latest collection – and later that year, the rest of us were able to enjoy this floral-green masterpiece. A new era in Chanel‘s perfume history was born –a wave of creativity that continues to this day. In 1974, Cristalle was unveiled: Chanel‘s freshest scent yet. In 1979, Jacques Polge became Chanel‘s third perfume designer;  his first feminine creation was richly opulent Coco, in 1984. Allure followed, in 1996, then in 2001, Coco Mademoiselle, which in the US (among other countries) has become even more widely worn than the iconic No.