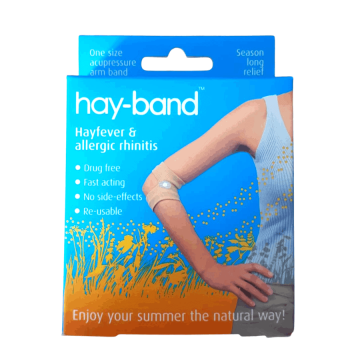 Hay-Band Drug Free Acupressure Band applies pressure to the LI-11 acupressure point. This acupressure point is a recognised point on the LI meridian and is used today, as it has been for many years for its therapeutic effects. It is believed that applying pressure on different parts of the body can clear blockages in these meridians and thus promote physical and emotional well-being.

Acupressure works in a similar way to acupuncture but does not involve the piercing of the skin in any way. Instead, the pressure points are stimulated from the outside - a technique which has been a part of Chinese medicine for 4,000 years. Chinese traditional medicine believes that a person's health is governed by the free flow of energy (known as "chi") through the body. This energy flows through channels or meridians around the body and along these meridians are many pressure points.

It is believed that an illness or other condition is due to a blockage or disruption in the flow of energy along the meridians within the body. Stimulation of the pressure points helps release the blockage so allowing the energy to flow freely and return the body back to it's natural balance. Each pressure point is believed to be related to specific parts of the body so a different point would be used to help treat a headache and other symptoms. In the case of the "Hay-Band", the acupressure point stimulated is the LI-11 also known as the "QuiChi" point.

What Is Hay Fever?

Hay fever (or Allergic Rhinitis) is a medical condition which covers a number of symptoms and is characterised by inflammation of the nose, throat and sinuses. It is caused by a wide variety of agents or allergens. Conventionally hay fever starts in the Spring and continues into September and the severity depends on the nature of the allergen to which the sufferer is sensitive. The reactions may be due to pollen (from grass, trees or other plants ) household dust, animal dander or house dust mites. With household allergens, the symptoms may manifest themselves as asthma.

The symptoms from one sufferer to the next varies immensely. They may be as mild as an itchy nose or in extreme cases, a mix of painful watery eyes, blocked nose, sneezing, headaches, a loss of concentration and sleep disturbance. For many hay fever sufferers, the Summertime brings complete misery as they are unable to carry on with normal life. Approximately one in ninety people suffer from hay fever badly enough to consult a doctor and many more have it in a mild form. It is not known why people become hypersensitive to these allergens but it is likely that altered immunity plays a part. There is some evidence that there is a link between hay fever and asthma or eczema.